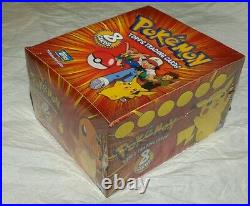 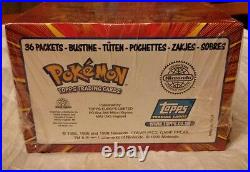 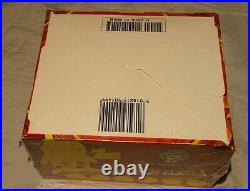 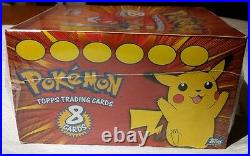 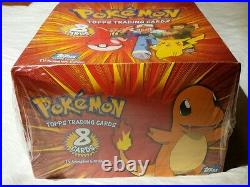 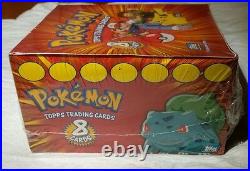 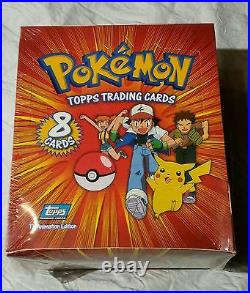 1st Edition Base Set 1999 Pokemon Topps Trading Cards Factory Sealed Booster Box. International Nintendo Licensed Product Global Seal. This set has been out of print for over 20 years now, and will never be made again due to Topps losing the license to the Pokemon franchise as of 2003. This is an unbelievably rare item. I have not seen anyone else with this type of box available for sale for a very long time. Sealed box contains 36 booster packs. Each pack is guaranteed to contain 8 cards including 1 Holographic Silver Foil card. Every card in the set has a chance at being a silver foil card including. Pikachu, Charizard, any of the Pokémon #1-76 (Bulbasaur to Golem), 12 TV animation cards, and 1 checklist card. This set was printed alongside the 1st Edition TCG Base set from WOTC, and was released for the very first time in the United Kingdom. This UK box contains the Base Set 1st edition of Topps Pokémon Trading cards. Topps European headquarters is located in the UK, and so while they were printed in the UK, they were distributed to various countries including the United Kingdom, Germany, France, and Italy. Topps Argentina location distributed their own boxes having Portuguese and Spanish printings, and then of course the New York headquarters for Topps produced the US versions for the United States. The boxes dimensions are also slightly bigger than the US-released box having 0.25 inch greater length , width, and height, so 3.25x5x5.75 inches as opposed to the US’s 3×4.75×5.5 inches. They also have some small differences in appearance such as the top of the box saying in a yellow action chat bubble “8 CARDS” as opposed the US’s One Foil card in EVERY Pack! , despite the fact that in either case, both boxes packs contain the same contents, that being every pack having 8 cards, as well every pack including 1 foil card inside. Also while the US box has a Squirtle on one of its 4 sides, along with Pikachu, Charmander, and Bulbasaur, the UK box opts instead there to include all the relevant information with regards to licensing and distribution. On the left and right side of the box with Pikachu and Bulbasaur on it there are also 6-7 yellow circles for aesthetics that the US box doesn’t have. On a final note, these boxes have a clear cellophane factory seal, while the US boxes have a clear cellophane factory seal that also includes little mini blue “Topps” logos. While the set list is equivalent to the US release, the cards have unique differences that further identify them as being the base set 1st edition of Topps Pokémon cards. Every card in this box comes with the ” International Nintendo Licensed Product” Global Seal on the back, as well the font of each Pokémon name comes in black instead of red. These charges are the buyers responsibility. The item “1st Edition Base Set 1999 Pokemon Topps Trading Cards Factory Sealed Booster Box” is in sale since Wednesday, April 7, 2021. This item is in the category “Toys & Hobbies\Collectible Card Games\CCG Sealed Packs”. The seller is “the_collectors_conundrum” and is located in Miami, Florida. This item can be shipped to United States, Canada.